On 9 February 2011 Dr Robert Stanley Lindsay went to be with the Lord, aged 83. Dr Steve Lee, who served at Kapsowar Hospital, looks back at Dr Lindsay’s service with AIM and the lasting impact of his work. 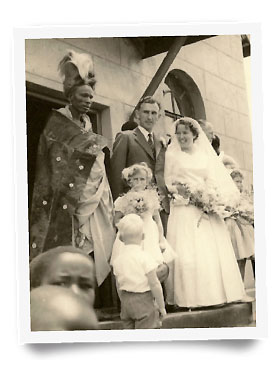 Stanley met his wife Pauline and married in Kapsowar

The legend of ‘Linsi’

I first encountered the name ‘Linsi’ after only a few weeks in Kapsowar. During a casual conversation with a Marakwet man, I mentioned that I was a missionary working through AIM. He excitedly responded that I must surely know ‘Linsi’. A bit embarrassed, I told him that I had never heard that name. He seemed incredulous and began to describe a missionary doctor who had lived among them years ago and did many great things. When I insisted that I still didn’t know him, he seemed exasperated at my ignorance. What kind of a fool had no knowledge of such a great man? Over the next two years, I would hear countless more stories of Dr Stanley Lindsay, who served in Kapsowar from 1953-1979. The Marakwet not only heard but experienced the gospel through Dr Lindsay’s love and identification with them. 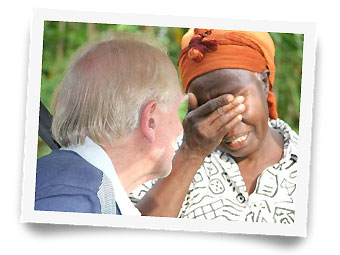 A medicine box on his back and machete in his hand

Often when visiting distant clinics or churches, I would be told that Lindsay had walked these hills with a heavy medicine box on his back and a machete in his hand. Others told of a time when Marakwet men came to kidnap wives for themselves among the Christian nurses working at the hospital. Lindsay got into fisticuffs with these would-be kidnappers and rescued them all! It was hard to believe that one man could have done so much in several lifetimes, let alone one. 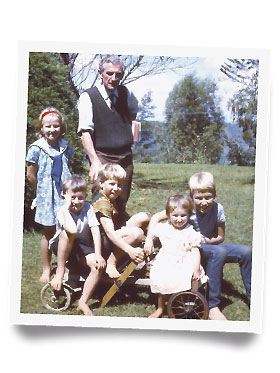 All his children were brought up at Kapsowar and bore Marakwet names.

I had assumed that Dr Lindsay had already passed away some years ago, and so was shocked to find that he was still living with his wife in England. And so when our family returned to the US for a brief furlough, I was determined to stop over in England and meet Dr Lindsay myself. In May 2006 I went to Bedford, England.

For many years he worked as the lone doctor of the hospital, and yet managed to run over 20 outlying clinics, as well as preach in dozens of churches and baptise hundreds of new believers.

It didn’t take long, though, to understand why he was so loved and revered by the Marakwet people. Although it had been 27 years since he left Kenya, as he began to share about his past mission work, passion and love exuded from his every sentence—his heart had never left. I expressed to him how deeply loved he was by the Marakwet people and how they longed to see him once again.

At the end of last year, he accepted the hospital’s invitation to visit Marakwet and be one of the keynote speakers at a fundraiser for the Kapsowar Nursing School. I had the privilege of travelling with Dr Lindsay throughout Marakwet, visiting the many places where he used to work. The outpouring of love and respect in each location was overwhelming. At one village (which wasn’t on the itinerary), the people made a roadblock with their own bodies and refused the vehicle to pass until Dr Lindsay came out and greeted them. Wherever we stopped, within a few minutes a crowd would gather as everyone wanted to the opportunity to meet ‘Linsi’. After the first few days he had greeted so many people that his hand had become painfully swollen. 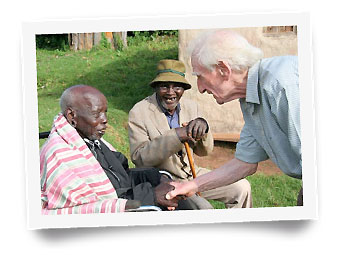 Dr Lindsay greets Marko near the town of Kapcherop

Interspersed throughout the many church meetings and welcoming ceremonies were some particularly meaningful and emotional reunions with those whom he had worked most closely. Now wheelchair-bound and over 100 years old, Marko Arap Kandie, a former hospital worker and church leader, confessed that the next time he ever expected to see Dr Lindsay again and be able to thank him was in heaven. With deep emotion he thanked God for this one final opportunity to be united with his dear friend in this life. After all these years, Marko remains faithful to the Lord, teaching a Sunday school under a tree in his farm.

The essence of mission

What was it about Dr Lindsay that evoked such deep love and emotion in the hearts of the Marakwet? The Marakwet always answered in the same way: ‘Linsi’ walked among us, spoke our language, slept in our houses, drank our tea, held our children in his lap, and healed our diseases. I heard the phrase repeated again and again, “Linsi is a Marakwet.” 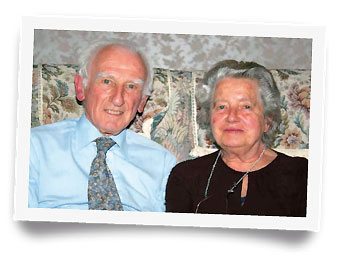 Dr Stanley with his wife, Pauline, at their home in Bedford (2006)

Despite all the technological advances, bigger budgets, and refined missiology of our day, the essence of missionary work remains unchanged: to follow in the footsteps of Christ and incarnate the love of God regardless of cost. The Marakwet not only heard but experienced the Gospel through Dr Lindsay’s love and identification with them. The cost of this love became clear to me on one sad day when we helped him search for the unmarked grave of his infant son who had been buried here many years ago. Who knows what other untold sacrifices he made in his efforts to share God’s love with the Marakwet? Following the writing of this article, Stanley’s wife Pauline also went to be with the Lord on Thursday 3 March 2011. They are survived by their children, David, Richard, Robert and Margaret.