This month Gideon Mashauri and his family will join a new TIMO team near Dodoma, Tanzania. Gideon, however, isn’t your average TIMO mission partner. His extraordinary story demonstrates how AIM is partnering with African Christians – many of whom have suffered in ways incomprehensible to the western church – to bring the good news of Jesus to all.

My name is Gideon Kasereka Mashauri from the Democratic Republic of Congo. I became a Christian through a spiritual revival in the city of Kiwanja in 1993. I began working as a youth counsellor, but my colleagues and I came under great persecution from local religious figures who didn’t like the way we taught from the Bible. This was during a time of great instability in Eastern DRC and they told the military that we were actually rebels and sent them to kill us. By God’s grace, one of the soldiers took pity on us and warned us to leave the country. I had to leave behind Rachel, my girlfriend of four years, but we promised that every Friday we would pray and fast for one another. I did not see her again for five years.

I managed to get to Bible college in Tanzania but couldn’t stay on for more than a few months due to lack of funds and because I’d fled without a Congolese passport. A Tanzanian official there sent me to a refugee camp in Kigoma. There wasn’t enough food in the camp. Five of us men would put our food together to make it stretch further. We’d have a very strong breakfast of porridge, with salt because we couldn’t find sugar. Around 3 pm we’d eat ugali (bread made of corn flour) with bean water, which was both lunch and supper. After three difficult months, I met a Congolese lady in the camp who wanted to go to Mozambique. She had money but was crippled, and paid for me to accompany her in exchange for my help.

Back to the refugee camp 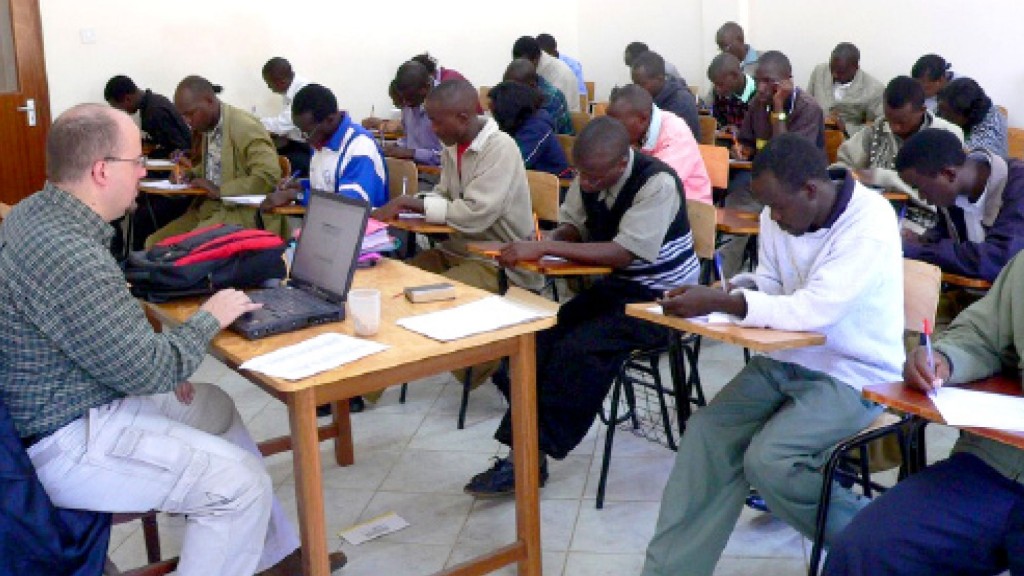 Named after the founder of AIM, Peter Cameron Scott, Scott Theological College was established in 1962 as the national theological college of the Africa Inland Church, Kenya (AIC), although it serves all churches in Kenya. Its purpose is to provide training for church ministries at a more advanced academic level than is available through the AIC Bible Schools. www.scott.ac.ke

After a long journey, we crossed into Mozambique, where officials and a Catholic charity helped us get to the government office in Nampula. The Mozambican government sent us to the Maratane refugee camp, where I spent four years. Life was very hard and most people tried to get resettled in Canada or the u.s.a but I would walk far away in the bush to meditate and pray, asking God to show me what to do. I wanted to leave the camp and serve him wherever he might lead me. But God inspired me to start a counselling ministry, assisted by two Christian ladies, to help the needy people in the camp. We showed people biblical solutions to their problems. God used me so much to reach those in the refugee camp and I also began to disciple believers. A friend had resettled in the United States and I wanted to write to him with prayer requests for the refugees, so one day I walked about 15 km to Nampula to search for missionaries who would help me post my letters. God helped me to meet missionaries called Shawn and Sarah and they became great encouragers to me. Together we organized a seminar for pastors at the refugee camp.

When Shawn and Sarah went back to the U.S., they told my story to a couple who were touched by God to sponsor my studies at Scott Theological College in Kenya. Before starting, I travelled back to Congo for three weeks where, after five years apart, Rachel and I were finally married. We then went to Kenya where I spent four years earning degrees in theology and inter-cultural studies at Scott, and our daughters Abigail and Sarah were born. AIM missionary Georgette Short was my first professor. It was her Introduction to Missiology class, and my conversations with her, that made me excited about serving God as a missionary.

“I am so thankful to God that he has been faithful to me… May God bless richly all of those who have helped me.”

Before graduation last May, my wife and I spent six months asking God to lead us to where He wanted us to serve Him. In January 2011, we talked to my Scott classmate Peter Pharles, a Tanzanian who is leading a new TIMO team to Dodoma in July 2012. He asked if we would serve with them. We felt God had opened this opportunity for us and the TIMO leadership agreed that we should join the team. I am so thankful to God that he has been faithful to me. I was able to graduate last year and also go back to drc for a month. I know that God will continue to provide for my support while I am on TIMO, as he has so far. I am thankful to Georgette and to the other faculty at Scott Theological College, for contributing so much to me and training me inter-culturally. May God bless richly all of those who have helped me. As Paul says in Romans 15:20, “My ambition has always been to preach the Good News where the name of Christ has never been heard.”