One of the most important factors in reaching the unreached is communication with local people, so learning to speak in their mother tongue is vital. Graeme and Eli Mallett describe some of the quirks of language learning.

One of our main objectives for our first year here in Mahajanga is to learn Malagasy – the fascinating language of Madagascar. We really want to be able to communicate with people and share our lives in their mother tongue as it makes a huge difference to how well we can really get to know people. Despite the fact that Madagascar is close to Africa, Malagasy is most similar to some of the languages spoken on the other side of the Indian Ocean in Indonesia. It is believed that many of the original settlers of Madagascar came from that part of the world.

Here are five things you probably didn’t know about Malagasy: 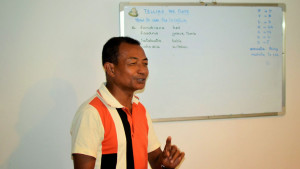 Graeme’s favourite word is mahafatifaty (“cute”) “Just because I like the sound of it.” Eli’s favourite word is mitsangatsangana (“to go for a stroll”), and really shouldn’t be confused with with mijangajanga – “to commit adultery”! “They can sound quite similar if your pronunciation is not very good, because ‘j’ is pronounced ‘dz’.”

– The Malagasy alphabet has just 21 letters – it is the same as the English alphabet minus the letters C, Q, U, W, X. Arab traders originally developed an Arabic script for Malagasy but it was never widely used. In the early 19th century a Welsh missionary called David Jones, who was sent by the London Missionary Society, developed the written form of Malagasy, which with some modifications (originally it had more letters) is still used today.

– Malagasy words always end with a vowel when written although sometimes this is ‘swallowed’ when people are speaking.

– Generally, a sentence starts with a verb and ends with the subject. So a direct translation of Malagasy into English might sound a bit like Yoda from Star Wars.

– A bit like German, Malagasy can add words together to get a new word. This means that some very long, polysyllabic words exist which can be a bit daunting to someone foreign trying to learn the language.

Over 2,000 languages are spoken across Africa. With over 900 people groups still unreached in the continent, language learning is as important as ever for AIM’s mission partners and will continue to be important for years to come as we work to reach the unreached with the gospel. If you want to find out more about these people groups, visit www.prayafrica.org for information and ways you can pray, or contact us via the enquiry form and find out how you can go! 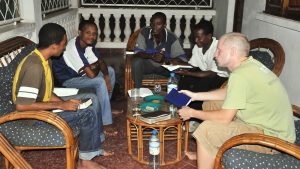 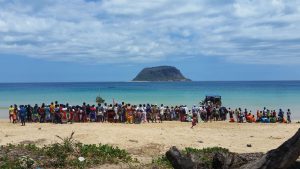