Pete & Libby Halestrap seek to serve the people attending and working in Kijabe Hospital Kenya. Here they share about the role the hospital has in outreach and evangelism.

As we read through the gospels we cannot help but be struck by Jesus’ compassion: for the lost, the mourning, the sick, the blind and the possessed. Jesus commands his disciples to behave like him and says that it is through such actions that his followers will be recognised.

As Kijabe passes its 100th year it continues to strive to follow this command as it practically demonstrates God’s love and compassion. It is a huge privilege for us to be part of such a ministry. We witness the blind seeing as the hospital performs cataract operations; we see the lame walk after they undergo surgery; and we see the almost dead(!) return to full health as they receive care. 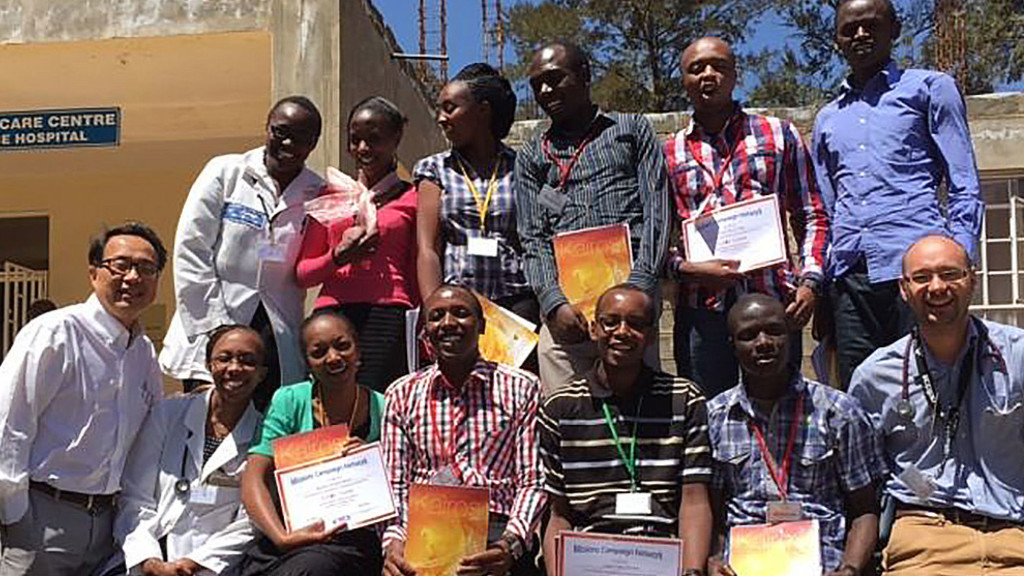 Simon* recently joined an internal programme developing clinical officers with additional skills in emergency medicine and critical care. As part of his training programme he attended the Kairos course, a compulsory element of the curriculum that encourages attendees to focus on God’s mission for his world. At the end of the course, as Simon stood up to share his testimony to the rest of the class, he was visibly shaking.

Simon shared how he had been encouraged and challenged by the course, and particularly how he had been convicted that if he was to serve God and witness cross-culturally as he felt he should, his life should be one of integrity and honesty. He confessed that he had a secret that he had never shared, specifically that he had a one-year-old child and that he was not married to his girlfriend, both of whom were in another part of Kenya.

Shortly after the course Simon and his girlfriend were married and his new family moved to live with him locally. He has also committed to being part of a planned outreach trip to a closed region of Kenya later in the year.

*not his real name.

From fear to hope

Many of the patients who attend the hospital come in desperation. They have tried other facilities, they have used all the resources they have, and yet they remain sick. As they are treated in the hospital it is wonderful to watch them be transformed from fear-filled individuals to people of hope.

Yet the benefit of the hospital’s activities does not end with the restoration of physical health. People of many different faiths come to Kijabe, including those from an Islamic background and those from areas hostile to the proclamation of the gospel. They attend primarily because of the good medical care that they have heard they will receive, yet as they spend time in the hospital meeting believers, hearing the gospel proclaimed and receiving loving and compassionate care, some also find Christ.

Light to a broken world

The hospital’s reputation has also resulted in invitations to work in Creative Access regions of Africa. It has been wonderful to see local leaders of areas opposed to the gospel inviting an explicitly Christian hospital to come and partner with them.

The hospital’s motto is ‘Healthcare to God’s Glory’ and it longs to be used by God as a light to a broken world. Please pray this may be the case.

“You are the light of the world. A town built on a hill cannot be hidden.  Neither do people light a lamp and put it under a bowl. Instead they put it on its stand, and it gives light to everyone in the house. In the same way, let your light shine before others, that they may see your good deeds and glorify your Father in heaven.” Matthew 5: 14-16