For the last few years the Digo Focus team have been using their various skills to come alongside the Digo and share the gospel with them. Samantha Johnson shares:

Our time as a Digo Focus team here on the coast of Kenya is coming to a close soon, and we’re so thankful and humbled at what the Lord has done and allowed us to be a part of here in Digoland. He truly is able to do far more abundantly than all that we ask or think! 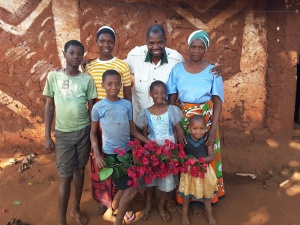 About six kilometres outside the main town centre, in the village of M, you will find one of the only Digo Christian families for many villages in this predominantly Islamic tribe. The patriarch of that family is a man who now goes by the name Stephen. As I sit with him, he tells me he renamed himself when he started following Jesus in the late 90s.

“I was reading the book of Acts, about this man who was killed because he was telling everyone that Jesus was God, and I thought…this man is like me!” He grins joyfully as he tells me.

His life before being in Christ had been a life of drunkenness and multiple wives. In his late 20s, he was suffering from debilitating health issues, which would bring him to pray in the name of Jesus, only to recover and return to Islam. It was during his last round of health issues that he finally surrendered to Christ’s calling.

“Soon after that,” he shares, “the Lord gave me the dream that I was to be a pastor in this village of Muslims. I was to start a church right here under our mango tree.”

God had obviously stirred something in the hearts of the Digo in Stephen’s village, because today, 15 or so years later, there is a church of about 15 Digo believers as well as 25+ children who meet and fellowship together on Sundays.

Counting up the cost

He and his family, however, have not been without trials and hardships as they preach Christ in their village. “They are always threatening to burn our house down, our church down. The witchdoctors try to poison us. They put snakes in our home. They curse us.”

As I sit with him and his wife, I encourage them with Jesus’ words. In my basic Swahili, I say, “In this world, we will be with many hard things, but give yourself heart…”

Before I can even finish, they confidently and joyfully chime in, “Jesus has conquered the world!”

Almost immediately after arriving early last year, several of us on the team were connected, through the providence of God and our respective ministry roles, with a few of the local Digo believers. It is these brothers and sisters who have since played a huge part in this ministry to the Digo, who are over 99% Islamic.

Fruit of the gospel

There have been Bibles handed out and read, audio scripture played, sick prayed over, young women and old men discipled, churches planted, and Digo missionaries sent out! Much of this fruit we’ve only just started to see since we arrived almost two-years ago, and we know it is only by the grace of God.

We’ve pushed through two languages, eating crunchy, dried fish from our neighbours, and several bouts of malaria, but we can confidently say Jesus is here in Digoland.

Our team leaders, Wayne and Joyce Raychard, have just retired from serving with AIM after 20+ years of service among the Digo. We know that their labour in the Lord has not been in vain. The two families and their 14 kids, as well as two of us single girls will be returning to continue working the soil they, and many other missionaries before us, have faithfully prepared.