Peter Maclure shares with us his tribute to Colin Molyneux a beloved missionary with Africa Inland Mission for almost 40 years, who went to be with Jesus on the 17th March 2018. Peter shares his thoughts particularly on Colin’s ministry and his life serving with AIM.

Colin has been described as a warrior for Christ. Another warrior, King David picked up five pebbles from the brook when he went to fight Goliath, I too will give you five P’s to cover my thoughts about Colin.

Colin & Christine served for four years as missionaries in Congo before joining AIM in 1974 and Colin officially retired in 2011 – so that makes 37 years of faithful and varied service.

Their first assignment was in Lokori in the Turkana area of Northern Kenya; then 4 years in the Kerio valley among the Marakwet involved in evangelism and encouraging pastors and being involved with Theological Education by Extension. Colin especially impacted a group of young people, many of whom are the church leaders of today. In late 1979 he was invited by Dr Dick Anderson to visit Madagascar and after much prayer and consultation, he and Christine moved to work there with the United Bible Society and then Scripture Union. Colin was soon to master the difficult Malagasy language. He particularly spearheaded the fellowship and prayer emphasis between the various missions. He was to return to Madagascar for another term of service in 1998 and it gave him unspeakable joy to see the growth of the work and the fruit of their earlier ministry.

Colin & Christine returned to UK in 1990 to settle their two children into higher education and become the Regional Representatives for AIM in the North of England. Half way through this time, Colin responded to the need for a French speaking builder for a new team in Chad and was involved in the development of the Missionary Training Centre. Although the joke was that he was neither a builder nor spoke French. As always, he managed well.

No-one was as practical as Colin. His background was as an automotive mechanic and there was nothing he could not fix or improve. Wherever he went his colleagues appreciated his practical skills and he could turn his hand to fixing cars, building, plumbing and electrics and of course building off road wheel chairs. This latter ministry became his passion and he made a unique and original contribution to redesigning wheel chairs for the rough African conditions. In this he combined his engineering genius with compassion for the disabled.  He was a true “fundi” – fundi is a Kiswahili word for a fixer – an artisan.

Worship and prayerfulness characterised Colin’s ministry. With his accordion accompaniment, many of his colleagues remember the impromptu times of praise and prayer – whether it was sitting under the stars in Africa or early in the morning at Christmas or Easter. Colin had a particular ministry of initiating and promoting prayer among church leaders and missionaries for which he will be remembered.

Passionate about sharing the gospel – evangelism and preaching.

The first task of missions is to share the good news of Jesus.  Colin took every opportunity to speak the gospel and to encourage pastors.  He had eyes to see and the sensitivity to the Holy Spirit to dare to speak the gospel wherever he ministered. He understood different cultural contexts and his preaching was vivid and well-illustrated. His outstanding ministry to young people in Kenya and Madagascar has resulted in many faithful church leaders who have faithfully stood the test of time.

So many of his colleagues have personal reflections and I know that I will not do justice in representing them. Janny van der Klis recalls his Bible teaching to the Turkana and his spontaneous praise and prayer. She also recalls that his vehicles were like his children. Chris Doust his travel to remote churches to encourage the pastors and the way the washing machine was adapted to pump water to their homes, while Mary Lucking remembers the ingenious contraption he invented when she needed traction following treatment for a slipped disc. Ian and Rosemary Pitt remember their warm friendship when they did medical safaris among the Marakwet. He is remembered in Madagascar for facilitating the fellowship between missions and commitment to prayer. In Chad he was asked to preach in French and we wondered how he would get on and he said, “Don’t worry I will speak on the Bon Berger and his brebis.”

His humility, sense of fun and love for the Lord impacted so many. Alan Mackie held him in such esteem that he named his dog ‘Moly’. He was always valued at residential AIM conferences as he played his accordion, did many practical tasks and interacted with everyone. John and Carol Cartmell remember how well he represented the mission and were highly regarded by the Christian community in the North of England. Bill and Rosemary Rettie were special friends and it was a joke that he always asked Bill what mileage he was getting on his car. I too was asked this question and use to make up wonderful imaginary mileages just to impress Colin. I also had several adventures as the ‘guinea pig’ being pushed off road around Sutton Bonington as he tested out his latest wheelchair.

Many have said that Colin was just lovely to be around and we know that his wife, Rosemary, will dearly miss him. He was a gift to the AIM family and we thank the Lord for Colin who is now alive forevermore enjoying the presence of the Lord that he served so faithfully. 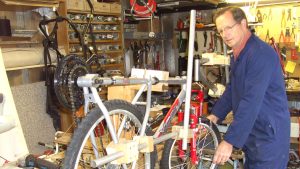