Who are the Amhara?

The Amhara people live in the northern and western highlands of Ethiopia, following a lifestyle that has not changed for thousands of years. Some live as farmers in the Ethiopian Highlands and tend cattle, sheep and goats.

82% of the Amhara belong to the Ethiopian Orthodox church, where the understanding of Scripture is limited to just the higher level priests. This means that most of the Amhara have no knowledge of the gospel. Instead, most of them hope to attain salvation by following various church traditions. There are many religious barriers, but there is a small movement of people who have understood and accepted the gospel, and although they are seen as an unreached people group, a few churches have been planted. 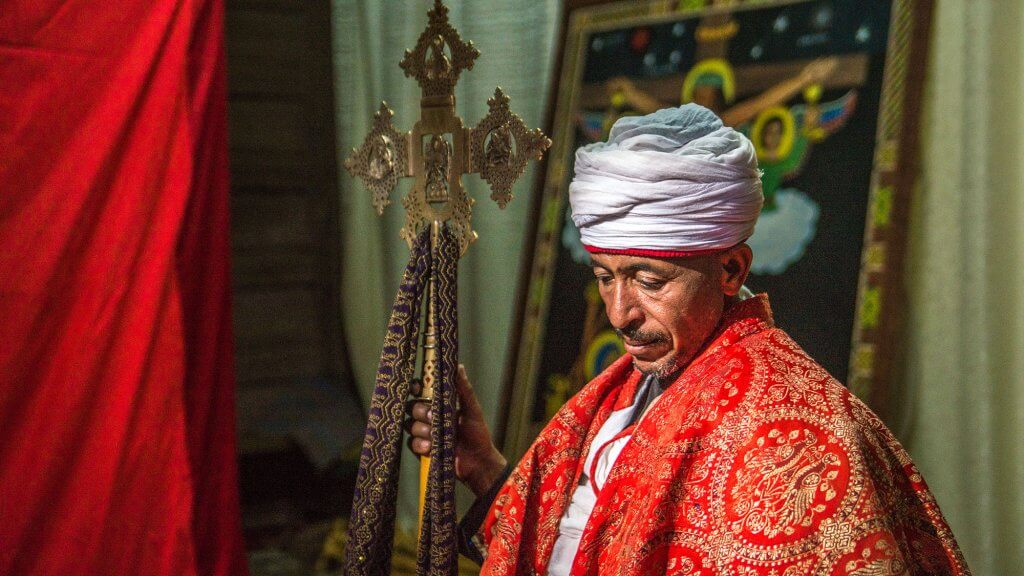 My grace is sufficient

Immediately after Pentecost Christian teachings spread into Ethiopia. The book of Acts records the story of Philip baptising an Ethiopian official, who then, it is assumed, carried the good news to the queen and many other people in the nation. During the fourth century, however, some beliefs shifted, and the Orthodox Church, with its holy sacraments, its emphasis on fasting rituals, and its reverence of the Virgin Mary and the saints, was established. Many priests today still lead liturgical church services in an ancient, now unspoken, language called Ge’ez.

Since many Ethiopian Orthodox Christians are unable to read, paintings on monastery walls help them understand the stories and truths of the Bible. Over time, non-biblical stories, have also appeared on the walls and into the common man’s theology. This causes great confusion among believers. How can they know which stories are true? What does the Bible actually teach?

Whilst Orthodox monks and priests are devoted to the Orthodox Church, they rarely grasp the true concept of Christ’s sacrifice for man’s sin and the beauty of God’s grace. Instead, because they adhere to a works-based theology, they are considered an unreached people group. They are taught that Christ’s death and resurrection atoned for all the sins of the past, but all the sins committed afterwards, in our current age, are still awaiting forgiveness. As a result, Orthodox Christians work hard to obtain that forgiveness, never knowing if their actions and prayers are sufficient.

These churches struggle to reach out to the orthodox churches surrounding them, because they also feel the need to clearly distinguish themselves as different. As the new believers come from the Orthodox Church, they reject all the orthodox traditions (which aren’t anti-biblical per se), in order to create an identity that is distinct in order to avoid confusion. This means that they struggle to present the gospel in a contextualised way that makes sense to those in the Orthodox Church.

To reach the Amhara, AIM is partnering with SIM to run a Training in Ministry Outreach (TIMO) team which will be based in Bahir Dar, the capital city of the Amhara region, which has a population of 300,000. This team will have a vision to mobilise individuals from the small local church to reach the Amhara with the gospel, and to equip and encourage them to reach out to their orthodox friends, family and neighbours. The hope is that together, we can engage with those in the Orthodox Church and open their eyes to Jesus.

It can be very difficult for foreign missionaries to work in Ethiopia as everything is regulated through strict work permits. So, we’re praying that we can establish a team that includes Ethiopians, other Africans and expats. We’re also planning for each missionary to have a job – this will be needed for work permits – but we hope that through their jobs, missionaries will build relationships with orthodox co-workers and clients. Jobs available range from university lecturers to youth pastors. Ultimately we long to see God’s people called and ready to share his truth with those
still waiting to hear it.