Why did God wake Robbie Mason up to start her Bible study early? It was because the witch doctor was on her way.

The Bible and the drum

As fairly new missionaries to the field we went to bed one evening with the sound of the witch doctor’s drum beating heavily in stark contrast to the total silence that normally accompanied us to sleep.

Very early in the morning, just before daybreak, the Lord woke me up and asked me to begin my quiet time. It soon became apparent why, as the sound of ‘M’e Manthabiseng’s drum grew steadily closer. She was the local witch doctor. While I stood and opened our hut’s door, the witchdoctor came into our courtyard. As she knelt down and continued beating with a glazed-over stare in her eyes, I let out a small plea of prayer. 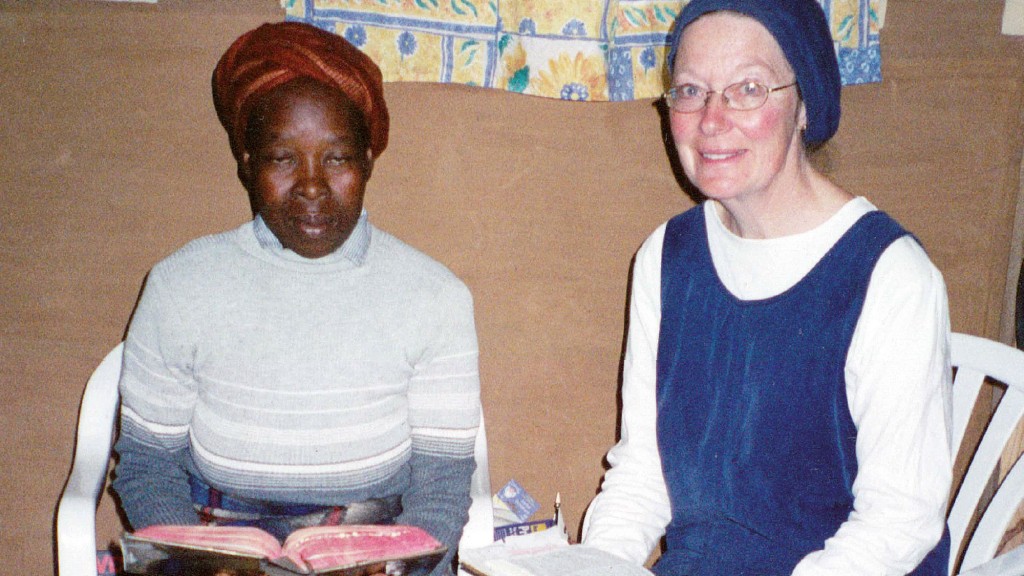 Manthabiseng Lehloa studying the Bible with Robbie Mason. Two of her favorite passages were 1 Timothy 6:6-10 & Daniel 2:20-23

The usual greetings didn’t phase her. Even asking her if she’d like some coffee or tea wouldn’t make her blink. So I excused myself and went inside for my Bible and coffee.

I returned and proceeded to let her know that she could drum away to her heart’s content, but that I was going to carry on with what I had been doing as well. As I opened my Bible and began reading out loud her spell was broken. She asked me to bring her out our Mosotho ‘mum’. I wouldn’t comply and wondered myself why she wasn’t coming out. So, the drumming began again.

However, I began reading and, sure enough, the Word of God broke through a second time. After several rounds of this the witch doctor had had enough and left with the words “I’ll be back!” to which I called out: “You’re always welcome here. Come back anytime.”

By mid-year, 2004, our time in that little village was coming to a rapid close. It was then that the Lord began revealing Himself to the witch doctor and gave her some pretty clear instructions. Things happened very quickly. She came to us asking for a Bible and began attending our morning Bible studies. Not two weeks after that she was praying a prayer of salvation in our hut. We spent as much time together as we could possibly afford while the Lord continued to speak to her with wonderful dreams.

Not two weeks after that she was praying a prayer of salvation in our hut.

After nine years of ministry in Lesotho, we had to leave our village and its people, who had become our family. However, one memory will stand out in my heart and mind forever. One of the men said: “Well, they must leave. Who will pray for them?” Without skipping a beat ‘M’e Manthabiseng’s hand flew up and then, in the exact spot where six years earlier she had knelt to call upon the demons, she once again knelt. But this time she threw her hands up in the air and lifted her voice in praise to the One who seeks and searches for those He has called His own. 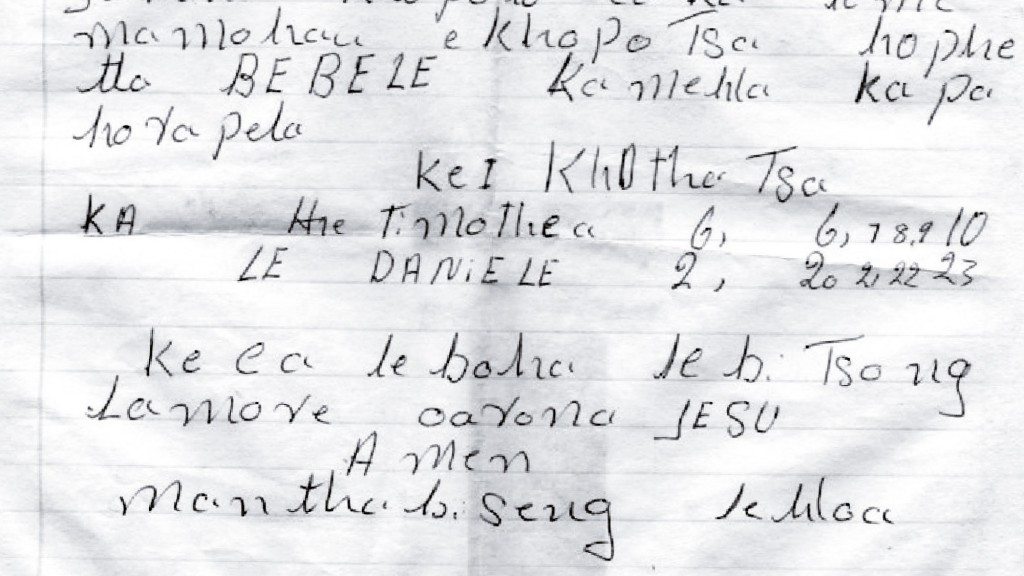 The hand written letter given to Robbie and Terry the day they left.

Robbie told The African Connection that after ‘M’e Manthabiseng’s salvation, there was always a strong feeling that demonic powers were continually attacking her, which often manifested itself in very physical ways.

Robbie recalled that when she talked about everyday things her voice was normal. However, all of this would change once she began to speak about Scripture. Her throat would contract and she would find it hard to force the words out, as if being strangled.

Shortly after Robbie and Terry left Lesotho ‘M’e Manthabiseng grew ill and died. To this day Robbie holds a hand-written letter dear to her heart. The ex-witchdoctor wrote it for them on the day that they left Lesotho. It translates:

‘M’e Mamohau le Ntate Teboho (Terry and Robbie) and your friends, go with the peace of God and remember me. And ‘M’e Mamohau be reminded of me always when you open the Bible and when you pray. I am encouraged by 1 Timothy 6:6-10, Daniel 2:20-23.

I thank you in the name of the Son of ours, Jesus, Amen