Reaching the San with the Gospel

Who are the San?

The term San is commonly used to refer to a diverse group of migratory hunter-gatherers living in southern Africa who share historical and linguistic connections. It is believed that the San have lived in the area of the Kalahari desert for thousands of years and may be the first humans to have occupied this region. Their language is known for characteristic “clicks”. Traditionally the San have lived in small family groups. However, in recent years, many San have begun to settle in larger groups around water sources.

Namibia, a country in southwest Africa, is distinguished by the Namib desert along the Atlantic Ocean coast. The country is home to diverse wildlife, including a significant cheetah population. The majority of the Namibian population is of Bantu-speaking origin. Other ethnic groups are the Herero and Himba people, who speak a similar language, and the Damara, who speak the same “click” language as the Nama.

Why are AIM sending a team to the San?

AIM are seeking to send a team to Tsumkwe, a very small town four hours east of Grootfontein, Namibia. 95% of the population are San and the surrounding lands are part of a ‘conservancy’, which is a designated area for sole control and use by the San for the San; therefore, the area is minimally developed. This has created an isolated and needy community far from the rest of Namibian life and attention.

There are churches in Tsumkwe but none are growing or would be considered ‘evangelistic’. It is hoped that the team can support the few committed Christians in the area through training and encouragement so they can reach beyond their church doors. Surrounding the town there are more than 35 villages that lack strong Christian witness or leadership due to lack of training, understanding of discipleship, distance and complications such as marauding wildlife. We are seeking to place a multifaceted team which can minister to this San community in physical and spiritual ways, with a minimum of one member designated to specifically train young leaders from various churches in discipleship and evangelism.

The strategy of this team will be to identify, train and support local Christians to be disciple makers and leaders in their communities by modelling an active, transformed lifestyle while teaching, serving and living in Tsumkwe. The strategy will be implemented in phases, the first being language acquisition and building trust in the community, secondly beginning Bible studies and training, then identifying local leaders to train up and partner, eventually releasing to Kingdom work without our presence.

What would I need to join this team?

– The most important quality and experience one will bring to this position will be one’s personal relationship and dependence on Christ for all needs. Abiding in Christ (John 15:1-4) should be one’s primary task above any ministry undertaken. Consistent personal and corporate prayer is part of this abiding and members should have a regular habit of lifting all concerns, joys, struggles, dreams and pain to our Father who loves us so.

– Language needed will be English and secondarily Afrikaans (or Dutch) if possible. Many people, women especially, speak only Afrikaans and the local language. Ideally, a candidate could learn some Afrikaans before arrival on site and then each member will be expected to spend a considerable percentage of his or her time during the first two years learning the local San language. This language, Ju/;hoan, is complicated and will require considerable and long-term effort to learn. Team members will be expected to keep language learning as a priority while still doing other work in the community.

– Experience in Bible teaching, discipleship and church planting as well as agriculture, community health, education and youth and children’s work could be greatly beneficial.

– A qualified professional in medicine, education or technical specialties would be considered but not the first choice of entry into this community due to immigration issues in transferring professional accreditation to Namibia. Experience in arid farming or livestock care could be beneficial.

– Academic qualifications. Although it may be helpful to have higher degrees in cross-cultural communication, theology, linguistics or in a professional capacity, they are not required. A Bachelor’s degree or Bible School diploma would be the minimum requirement.

How long will this team last for?

The length of this position is at least four years. The San have repeatedly been objects of short-term projects and initiatives, which have either ended too quickly or failed to deliver. Long-term relationships will have the longest, deepest impact in this community. Given the complexity of the San people’s language and culture, candidates should seriously consider committing to a second term of four years to realize a “return on their investment” in language and cultural knowledge.

Tsumkwe is poor and isolated, with little fresh food available, poor internet service and sporadic cell phone service. It is hot, dry, dusty and dirty. There is a local clinic staffed by a nurse, but the nearest doctor is 90 minutes away. There are some good family physicians and a local hospital in Grootfontein, four hours away. Malaria is endemic but not common. Housing would be a cement house with a tin roof, possibly with a long-drop toilet. There is running water which is consistently available but may not be piped into the house. Electricity does cut out sporadically, but is generally consistent. There are no good local schools (and no childcare centre), and only small shops where one can obtain canned and pre-packaged foods. Bread is available some days. The capital of Namibia, Windhoek, is about eight hours away and has excellent medical care, services and supplies available. The San are kind and protective of those they have accepted into their community, and our workers in the past have become part of San families with the benefits that come along with such status. 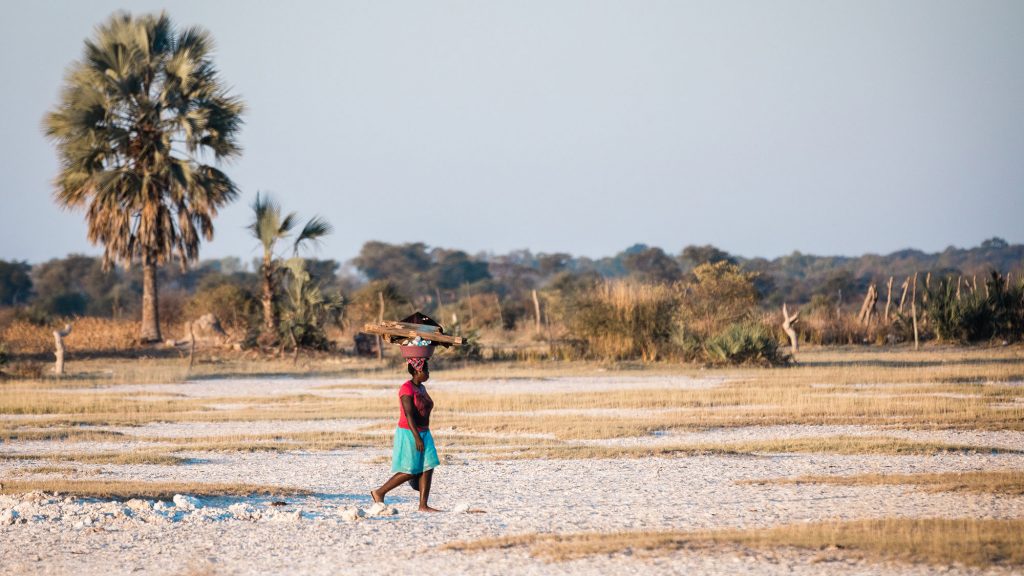