Hervé and Nathalia Ramangalahy are part of a ministry team serving among the Sakalava on the island of Nosy Be in Madagascar. Their summer camp for local children begins today. Please pray that the camp will run smoothly and be well-received by the children. Pray that the team running the camp will serve together well, and that the children will have hearts open to the gospel.

We are looking for people to proclaim Christ to the unreached people of the Islands through medical work. Please pray that the Lord would raise up people to serve on this team. Pray too for more people to share opportunities like this with their churches and networks, so that the needs in Africa can be made known to a wider audience. You can find out more about the Islands opportunity here.

Pray for Esther, a believer on the Indian Ocean Islands. It had become known in her village that she follows Jesus, and some people insulted and threatened her, saying that they would destroy her home. Not long after, she had a dream of a man in all white, shining so brightly she couldn’t see his face. He told her not to worry because he will meet with those people who threatened her and they will know him. Pray she would witness lives changed.

Mark and Hannah will travel to France for language school in just over two weeks’ time, in preparation for serving among the unreached Acacia* people in Chad. Please pray that they will be able to leave the UK well, balancing their time between the things they need to do before leaving and spending quality time with friends and family. Please also pray that they will settle quickly in France, and for God’s help as they learn French over the next academic year.

We are thankful that the release of restrictions means that we can send out Connect and Connect Junior magazines from our office at the end of August. By filling envelopes ourselves, we save some money but also are able to send large numbers to churches for the first time since the pandemic. Pray that churches receiving these magazines would be enthused about mission and contact us to know more.

Pray for Ma Imani and Sophie, local believers in the Indian Ocean Islands, that they will know that Jesus is with them and that they are not alone. Pray for all those that they share the gospel with, that it will fall on soft and ready hearts. Pray that changed lives will impact communities and villages and that those who are threatening believers would come to know Jesus too!

Jessica Goldschmidt-Habyarimana works as the Communications Manager in the AIM France office. Last month she was involved in training short term missionaries on the Francophone GO programme, which equips participants with the basic skills to live and share the gospel with people who have never heard it. Please pray for the next stage of the programme as the AIM France office arrange placements in Africa for the participants.

Hannah returned to Chad, and her ministry at Wellspring Academy, two weeks ago, after having been in the UK for Home Assignment since last summer. Praise God that she was able to return, despite international travel being difficult at the moment because of Covid-19. Pray for her as she reconnects with the other staff at Wellspring and prepares for the start of the new academic year this month.

Please pray for the Short Term UK Diaspora team, which begins today and runs until 8th August. The team is partnering with a Midlands city centre church to run a week of events building on the work this church has already been doing among its diverse local community. Pray that the local community will see something of God’s love for them through these events. Pray for opportunities for team and church members to speak of Jesus. Please pray for this church’s ongoing witness to the community.

Our weekly prayer email provides up to date prayer and praise items on the peoples of Africa and the missionaries serving amongst Africa’s people and the latest from the mission field. 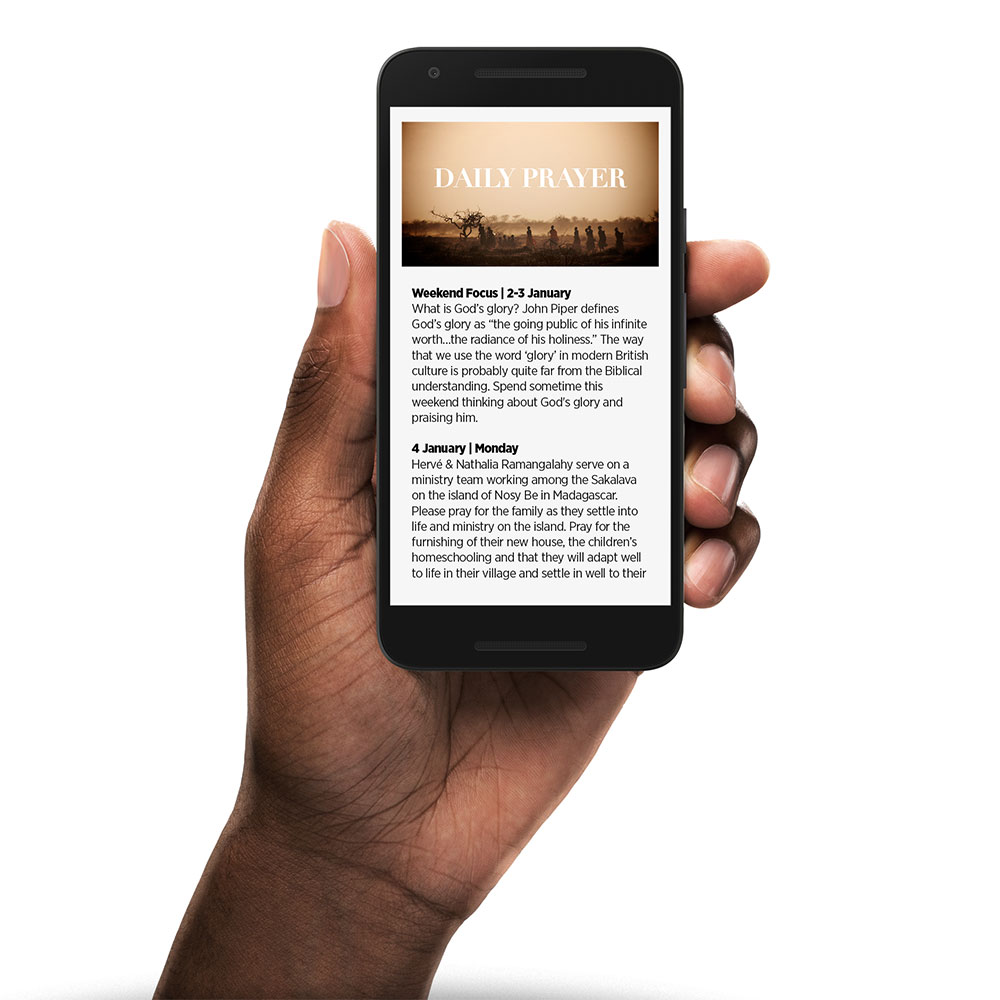